UofTHacks, and it was amazing! This was the largest Student Run Hackathon to take place in Canada, with over 350 participants in total! UofTHacks was a 36-hour hackathon that took place between Friday 27th September and Sunday 29th September. Here’s a breakdown of what happened for all of you who missed it, and a reminder for those of you who were awesome enough to be a part of it.

We began with registration, where each participant was given a swag bag, and had some time to meet with other hackers and some of the sponsoring companies that had setup booths. The Swag Bags had some stickers from Various Companies like Google, Git Hub, Microsoft and Stackoverflow, as well as pens, flyers and information about the event.The bags themselves were tote bags with the UofTHacks logo on them. 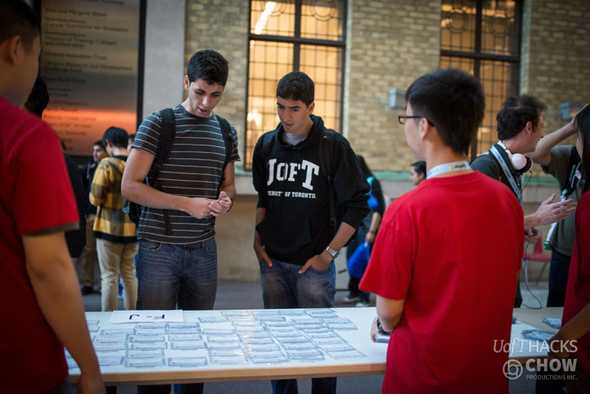 We then headed over to the OISE building for the Opening Ceremony which included a Key Note, and going over what would happen at the Hackathon. There was a great turnout from many different schools such as UofT (of course), Waterloo, McGill and students from other Universities like Harvard and Rutgers as well. We introduced some of the executive team, as well as went over the rules for the hackathon, and the general outline of the timeline.

The Key Note was done by Tobias Lutke, the CEO of Shopify, our platinum sponsor. 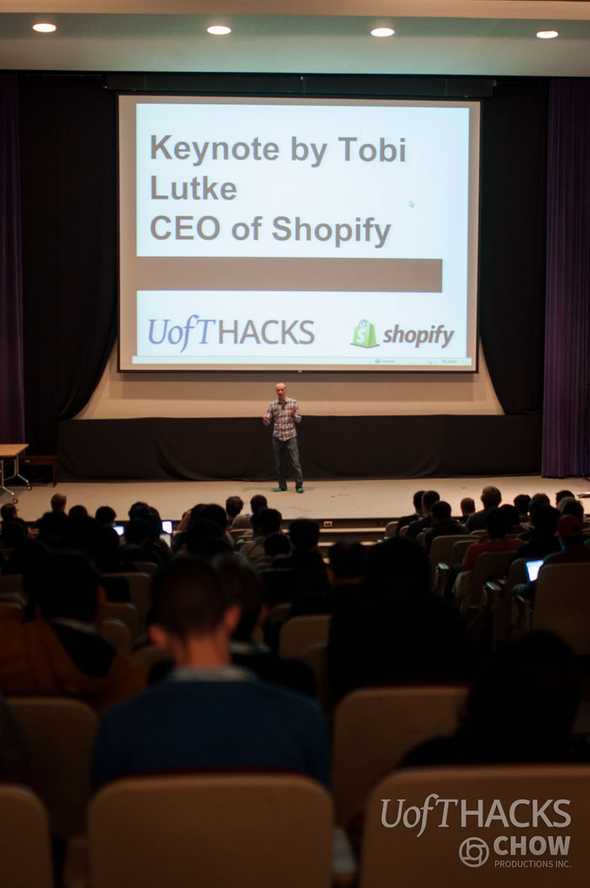 Here’s a video of the Opening Ceremony and Key Note. Only after watching the video did I realize how many times I said “Umm” - so sorry guys!

We then headed back to The Bahen Center, where hackers dug into some food before starting off on their hacks. Whilst hackers hacked, some of the exec members walked around asking Trivia Questions, and having casual chats while handing out some of the swag companies had given us. We’d also set up raffles to reward people who had stayed up all night, and these prizes included Android Plushies and Yoyo’s, Stickers, Splinter Cell Swag, Git Hub T-Shirts, Movie Tickets, posters, and much much more! We had music pumping in The Great Hall (BA3200), which is where we held the raffles, and as a result convinced people to take part in impromptu dance-offs to gain more raffle tickets. These went on all night, until we needed to start getting ready for the next day.

Breakfast is an extremely important meal of the day! We made pancakes, bagels, got coffee and other delicious breakfast foods. Once Hackers were well fed, we got to some of the exciting activities of the day. The first being our Tech Expo and Job Fair. Here sponsoring companies set up booths with information about potential future employment, as well as some of the cool gadgets that the company currently works with. We even had a 3D printer setup! 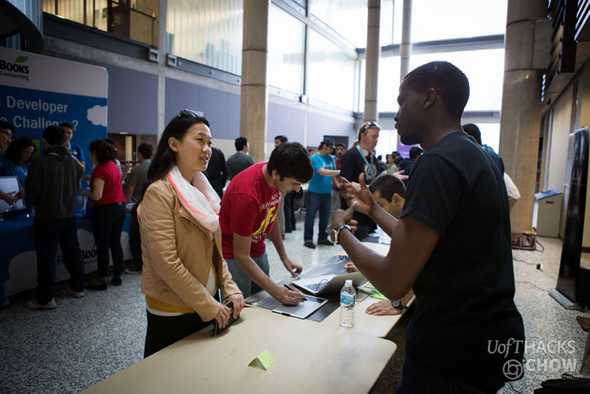 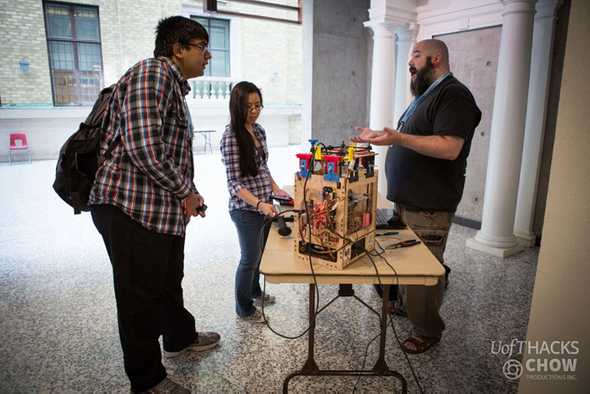 Following the tech expo, we had Seminars hosted by some truly amazing people. The first was by Rosy Rumpal, a lawyer with a huge interest in startups. She walked us through some of the many legal issues that are important, and that one needs to know when considering creating a startup company. She was followed by Niche Thevarajah from Oanda who discussed their API system. Finally, we had Harry Brundage from Shopify talk about the inspiration that led to Shopify, as well as answered many questions about what it was like to work at Shopify. Below you can find a video of these seminars. 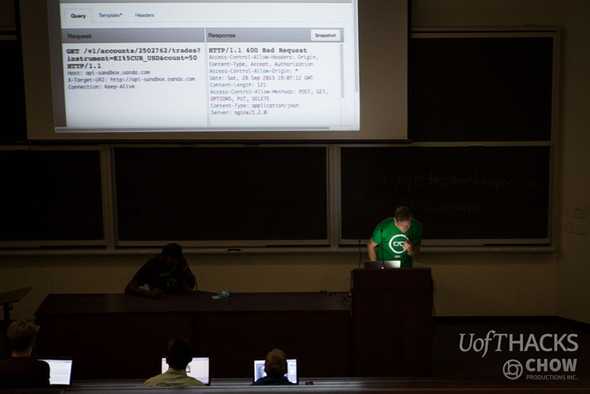 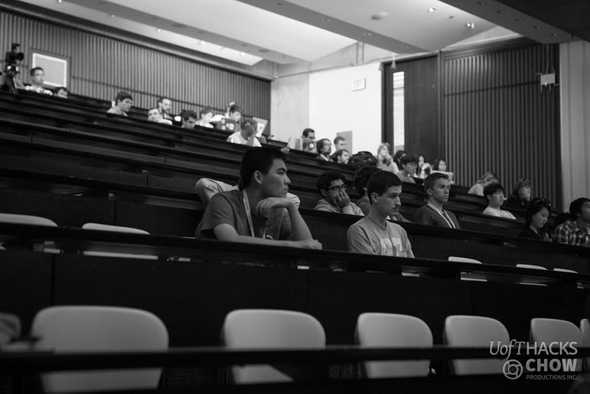 After the seminars, the amazing team from Cofoundster helped setup a unique experience for UofTHackers. They found individuals in their community with different backgrounds to come out and talk to students about their projects, and some of the best ways to grow their project and help turn it from a weekend hack into a profitable startup in the future. Students signed up and the team stayed on longer than expected to help out and keep giving students advice, and the hackers seemed to really appreciate it as well. 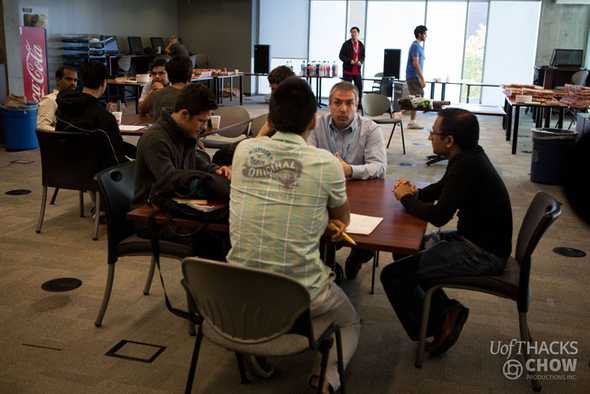 This long day of activities was followed by Dinner, and then another night of hacking, napping, dancing and prize raffling. We held two larger Raffles the second night, had even more people dancing, and gave away even more prizes. A huge thanks to all our sponsors who helped provide us with the swag we could use for the prizes! We also had a little surprise in store for the students that stayed up all night hacking! We got an ICE CREAM TRUCK with unlimited Ice Cream for students all night long!

Finally, the end was nigh. We gave hackers instructions on how to submit their hacks as well as constant reminders on how much (little!!) time was left before their hacks were due. They also had to consider prepping for the Hack Expo, where they needed to demo their app in front of numerous judges, as well as other participants and sponsors.

A full list of submitted Hacks, as well as descriptions/demos etc. can be found on our Hackathon.io/uofthacks page. These were honestly absolutely amazing hacks that span from tweeting using the command line, to tracking and translating Sign Language. Below is a list of all 35 officially judged hacks. 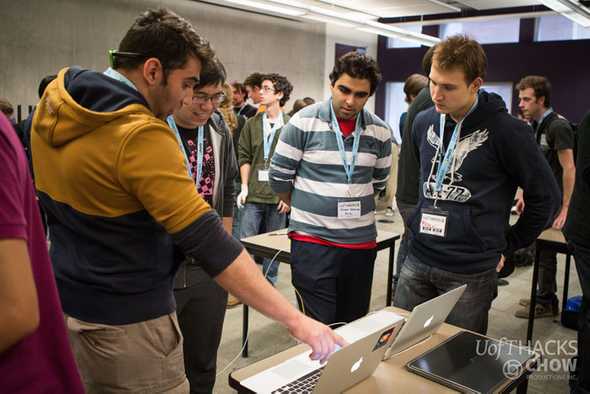 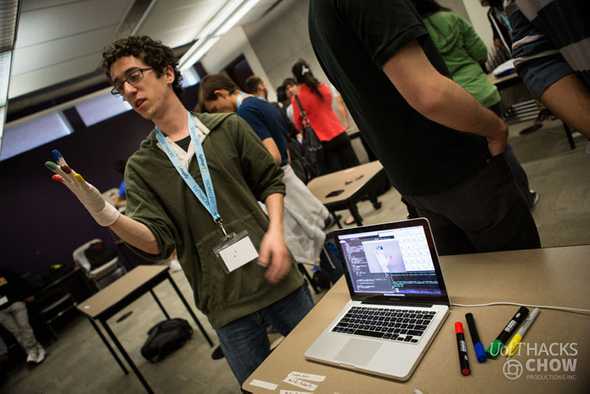 We had two types of judges circulating the room, the first group being the overall judges that comprised of a representative from Shopify, and CoFoundster, as well as UofT’s very own Karen Reid and Joshua Gans. We believed this mix of judges from both different companies, as well as different fields of teaching, would help create a balanced discussion when selecting the final winners. We asked these Judges to base their judging criteria on Design, Innovation, Flashiness, Fun Factor, Usability, Functionality and a large proportion of the scoring went to Marketability and Presentation. We really wanted to emphasize the importance of being able to market a product, and thought this was a very important aspect to keep as part of the Judging. The second type of Judges at the Hackathon were the Categorical Prize Judges. These were companies who decided to sponsor their own prize, either to appreciate an apps use of their API, or just to improve the average students life. We let the companies judges determine their own judging criteria for this app. Below are the list of categories. 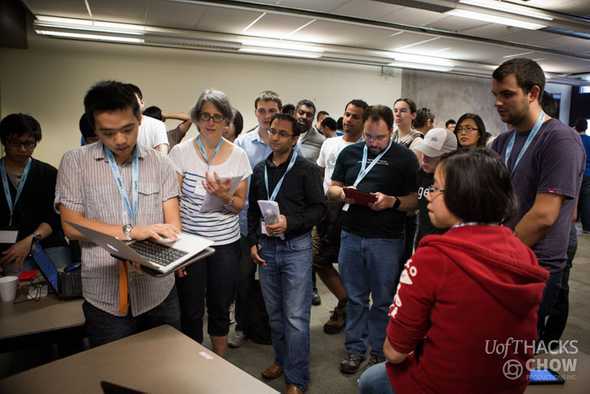 Once we had the finalists determined, we began the Closing Ceremony. A bittersweet moment that signified the end of an amazing weekend. Each of the finalists, as well as the winners of each Category were asked to present their Hack in front of the entire audience. We then ended with a few closing remarks, and some thank-yous to all our sponsors, judges, volunteers and hackers. 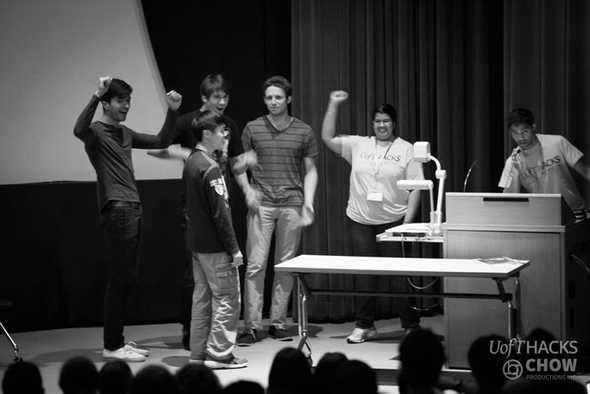 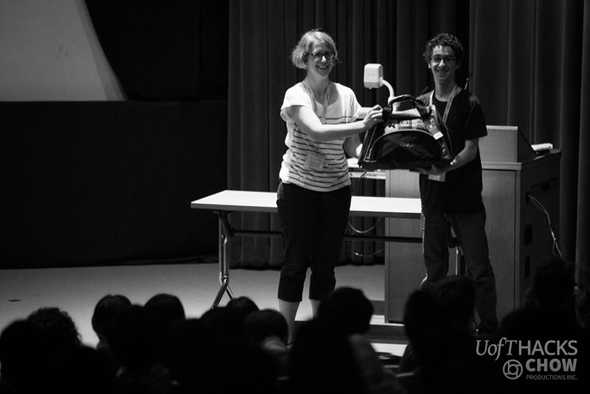 I’m trying to see if there was a video recording of the Closing Ceremony, however I’m not sure that there was one :(

A huge thank you to Chow Productions for their amazing photography and filmography throughout this event.

I have uploaded all the photos onto our Facebook page.

There were also two videos of the Opening Ceremony and the Seminars as well.

If you have any photos or videos that you’d like us to share (we’d really appreciate it!) then please email them in to us at contact@uofthacks.com.

I was looking over the budget request for our Computer Science Student Union (CSSU) last year, and noticed that we had money allocated towards a hackathon but never actually planned one. I was gutted. I’d been hearing about PenApps, MHacks and many other hackathons, as well as taking part in one or two myself, and decided that UofT needed to throw one. A big one. And it had to be epic. I tried piecing together ideas from hackathons I’d been too, as well as popular trends in the College Hackathons being hosted all over USA. I was fortunate enough to get an amazing team who was just as passionate as I was in trying to setup UofTHacks, and applaud them for how much work we put into it. It didn’t “hit me” as actually happening until I put on my orange UofTHacks shirt, and started signing in the first few hackers. It was unreal. Students travelled hours to come out to UofTHacks. To come out to an event that I helped plan. An event that they don’t know anything about (I mean, it could have been terrible (I’m really hoping no one thought it was terrible (Oh gosh. Was it terrible? (I’m sensing a nesting issue and shall stop now)))).

I had such a great time getting to know the sponsors and company reps who attended our event, as well as spending time getting to know the hackers and some of the amazing projects they worked on. I think nighttime was my favourite time coz I didn’t need to do much supervising, and had more time to walk around and talk to people. I’d walk around with a bowl of goodies and “reward” people who answered random trivia questions or did something funny. I also WOO’ed. A lot. It’s something I’ve done for ages, and accidentally made it “my thing” at the Hackathon. Whenever I’d enter a room, or make an announcement, I’d WOO. During the Closing Ceremony, as I was getting ready to start the final announcements and congratulate the finalists, the audience WOO’ed me. It was honestly my favourite and most rewarding moment of the Hackathon. WOOOO.

Some Much Needed Thank You’s

From the help we got from the University when it came to renting space and equipment, to support from the Department of Computer Science in helping us push the idea of hosting a Hackathon. Also a shoutout to Dave Fontenont who gave me countless advice through the early stages of planning from his own experience (if you’re part of the Hacking Community, you definitely know who he is). A huge thanks to all the volunteers who stayed and helped make the event manageable, and to the sponsors who provided us with swag and the money we needed to fund the event. I’m in shock at how much we were able to collect, and how willing companies were to come out and meet with students over a weekend! A definite thanks to my exec team, and those that stepped up and did work above and beyond what they needed to (and who tolerated me). And finally, the biggest thank you goes out to all the hackers that took part. Without you, the event couldn’t have been a success. Your passion and will to code for 36 hours is one of the reasons that drove me to planning UofTHacks. What I didn’t expect was how much more passionate and amazing you guys really are, and it’s definitely got me pumped to start planning the next Hackathon!