This is part 1 of a multi-part Intro to AngularJS tutorial series. Part 2 can be found here.

Before we can churn out a kickass Star Wars website, we’ll create the “Hello World” of Angular Apps.

I usually like to keep my files organized, especially since I’ve seen what happens when you have over 100 files for a single project. With that in mind, let’s create the following files and folder.

I like keeping all controller related files in one folder, and the same for my views files. If we get down to creating directives or services, then I would also create individual folders for those as well, but this is good for the Hello World app.

Now we can open up the index.html file and start creating the app.

So the important things you need to understand from the above code is this:

Next we’ll move on to creating the app.js file. Open it up, and add the following line:

The code above creates an angular module called AngularApp that has ngRoute as one of the activated options, and assigns it to the angularApp variable.

We’re now going to setup the routing configuration, so underneath the line you’ve already added in the app.js, add the following code:

This let’s you add and configure the routeProvider. What’s important here is in each when block, you assign what the router should do (second parameter) when the first parameter (in this case ’/’) is rendered in the browser. For now, we’ll assign the templateUrl to views/main.html, which links to a main.html file we will create in the views folder. Assign the controller as MainCtrl and the controllerAs to main. We will create a controller called MainCtrl, and this is what the routeProvider will pick up on.

You can have multiple when blocks, however at the end you should include an otherwise block. Think of this as a catchall incase someone hits a URL that doesn’t exist. You can setup a 404 page here, but for now we’ll just let it reroute back to the main page.

Now we’re going to create our first controller. Inside your controller folder, create a new file called main.js and add the following code.

Here we have created a controller called MainCtrl. Within the .controller() you have two parameters. The first parameter is the name of the controller (which you use in the router). The second is an n-length array that can contain a few different things. The first n-1 elements in the array are all different object types that you want included in AngularJS. In our example, this includes the $scope object (which we’ll dive into soon). The nth element is a function() call, where all the objects you previously listed will also be listed as parameters being passed into the function. It’s a little redundant, but oh well. Inside this function, you can include the logic for your website, in our case we create two variables ($scope.heading and $scope.message) and assign some strings to these variables.

Ok, we’re on the last part of our Hello World app - we need to add a view. In the views folder, create a new file called main.html. Inside this file, add the following two lines:

AngularJS renders anything within {{ }} as Javascript. You can actually stick logic between these brackets! In our case, we’re referring to the heading and message variables we created on $scope.

Phew, that was a lot. Now, let’s go over to our terminal, and create a simple HTTP server so that we can run the AngularJS app. Make sure you cd into the angularJS app that we created, then type one of these commands:

And finally, go to http://localhost:8000 in your browser and let’s see what we got! If everything went according to plan, then this is what you should see. 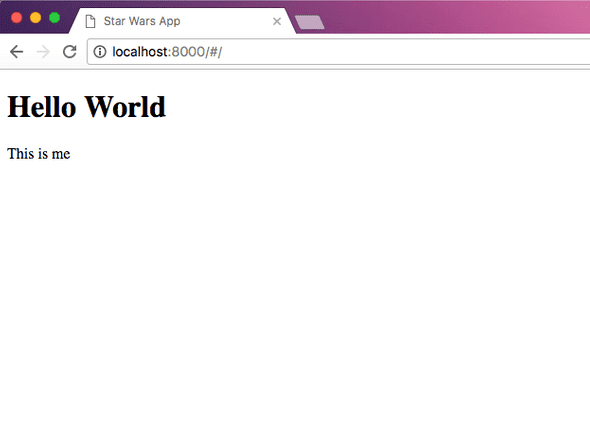 If you think you’ve made a mistake somewhere, you can access a copy of the above code from the accompanying github repository. Click here to see all the code upto the end of this section.